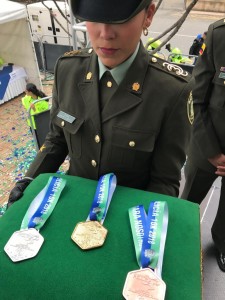 An USIP delegation joined a massive running event with more than 13.000 athletes organized by the Colombian National Police in the city of Bogota Colombia.

One of the goals of this running event that consist a 5 and 10 K run is to connect the community of Colombia with the Police by sports.

The participation of this event was also open for other South American Countries. Athletes from Ecuador, Argentina, Mexico, Chile, Costa Rica, Panama took part at the spectacular run in a sunny Bogota.

The Director General of the Colombian National Police General Jorge Hernando Nieto Rojas said : Sports is an important tool for Police Officers to stay in a fit and healthy life style. But we believe also that sport is a good tool to connect the Police with the Community of Colombia. It shows the Community that under all circumstances the Police is ready to serve and protect the people of Bogota and Colombia.”

Members of the USIP and the UDEPP (Pan American Police Sport Union) were attending the medal ceremony and had the oppertunity to award the winners. The USIP delegation consist the USIP Secretary General Sandro L. Dirckx, dept.Secretary General Col.Khalid Alnajar and the USIP Director of Public Relations and Marketing Col. Tariq Alsaddani.