The USIP President Sheikh Ahmed Nawaf Al Ahmed Al Sabah and members of the USIP Executive Committee had a meeting with the President of ASPMI(Italian Police Sports Federation) Mr Antonio Barbato and the ASPMI Vice President Mr Massimo Re at the USIP Presidential Office. 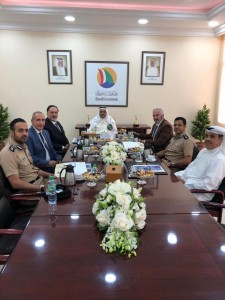 During the meeting the ASPMI President Mr Barbato held a presentation about the upcoming 3rd USIP World Police Games which will be organized in September 2019 in Milan -Lombardy. All details and preparations were discussed about this upcoming World Police Sport event. Registration shall start next December 2018 for 7 disciplines ( shooting, swimming, cycling, running, judo , jiu Jitsu and skeet)
The representatives of the USIP are convinced that with the experience of the ASPMI the 3rd USIP World Police Games will be again a great success for international delegations and their athletes .