DUBAI: Based on the directives of His Excellency the First Deputy Prime Minister and Minister of Interior in Kuwait and President of the International Police Sports union, Lieutenant-General Sheikh Ahmad Nawaf Al-Ahmad Al-Jaber Al-Sabah, the (USIP) will participate in the World Police Summit in Dubai from 13-16 March. 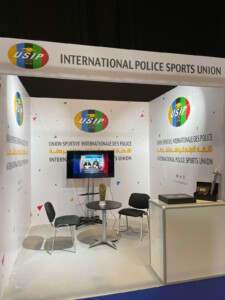 The International Police Sports union is represented by a member of the Technical Committee, Brigadier/Walid Al-Shehab, the deputy Secretary-General, Director of the Presidential Office, Colonel Khaled Al-Najjar, and the Executive Director of the Public Relations and Marketing Committee , Colonel Tariq Al-Sadani.

The summit is held under the patronage of His Highness Sheikh Mohammed bin Rashid Al Maktoum, Vice President and Prime Minister of the UAE and Ruler of Dubai.
The exhibition and conference is the first of its kind in the Middle East to prepare police and law enforcement agencies for emerging policing challenges.
It is worth noting that the summit is an important opportunity for police leaders and law enforcement agencies at the local, regional and international levels to communicate with governments and policy makers, enhances the forward-looking vision of police agencies and consolidates innovative capabilities to meet challenges in the field of security work, and an opportunity to exchange experiences and knowledge and to be informed of the latest developments.