York County, PA • July 13-20, 2014 York, Pennsylvania welcomes police, fire, EMS and all other first responders from all over North America for the 2014 York Can-Am Police-Fire Games. From July 13-20, 2014 over 30 venues in York County will be packed with over 2,000 competitors. The Games are free to the public and offer great competition for those who participate. All proceeds from the Can-Am Games benefit a charity of choice by the host city. York has selected the Make-A-Wish® of Greater Pennsylvania and West Virginia to receive all proceeds. 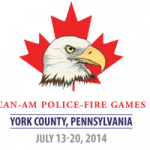 The 2014 Can-Am Games will feature more than 50 sporting events, including traditional athletic competitions such as swimming, softball, golf and cycling as well as industry-specific events such as SWAT, police narcotics dog, toughest firefighter alive and toughest competitor alive. New to the Games for 2014 are an EMS challenge, a revamped Public Safety Motorcycle competition and an Olympic Lifting event which will take place at the York Barbell Company, home of the United States Weightlifting Hall of Fame.

York County is located in the center of Pennsylvania’s #1 Tourist Region, just a short drive to Lancaster, Gettysburg, and Hershey. The region offers convenient access via road, rail and air and is central to many major East coast metropolitan centers such as Baltimore, Philadelphia, Washington, D.C. and New York City.