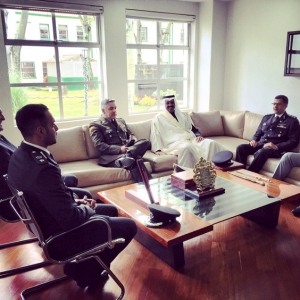 The Presidential delegation will attend on the 3rd and 4th December 2014 the USIP International Seminar on Coexistence and Security at Soccer Matches. During this seminar several scientist and experts shall speak and discuss about this subject and several thematic panels with multiple participants will be held.

During the meeting the USIP President talked with the Director of the Police Academy about the ins and outs of this International Soccer Seminar and also about the upcoming 1st USIP World Police Games that also will be organized by the Colombian Police on location at the Police Academy next year in 2015. The Presidential delegation consists the USIP President, the Secretary General Sandro Dirckx, the Deputy Secretary General Col. Khalid Alnajar, the General Treasurer Col. Abdulrachman Al Haqqan and the Head of the Public Relations and Marketing Lt.Col. Tariq Al Sadanni.