Ethiopia signed the membership of the USIP

Home/News/Ethiopia signed the membership of the USIP

Ethiopia signed the membership of the USIP

Doha, 5th of December 2013.
The President of the USIP Lt. Gen. Sheikh Ahmed Nawaf-al Ahmed a Sabah signed a new membership agreement with the Ethiopian Police Commissioner Desta Asmelash Girmay at location at the Marriott hotel in Doha, Qatar. 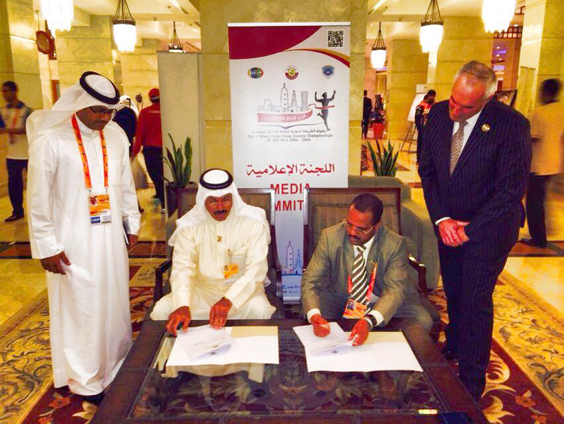 The USIP has already started last year with supporting a social Judo project to promote sport among the Ethiopian community.

Ethiopia delivers great sport athletes and sport is very popular among the Police. After the signing of the agreement, the President of the USIP congratulated Mr. Desta Asmelash Girmay. Afterwards Mr. Desta Asmelash Girmay on behalf of the Ethiopian Police declared that Ethiopia from now on can take part at future World Championships organized by the USIP. He is looking forward that his athletes can attend the next USIP World Police Championship.