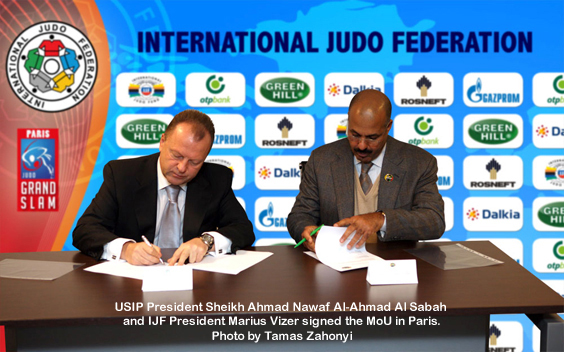 This partnership is based on the intention of extending the diplomatic, sports and professional collaboration between the IJF and the USIP. The following priority directions of cooperation have been defined: common strategy on social protections of police judoka, competition advocacy, common competition and regulation, control of public procurement.

In order to establish all agreed directions of cooperation between the IJF and the USIP, the IJF will be represented by the Military and Police Commission (MPC) responsible with the implementation of judo development policy throughout the police, and the USIP will be represented by the USIP Judo Sport Committee that will be responsible with the implementation of judo development policy throughout the police sport activity around the police.
The purpose of this partnership protocol is to define the process of facilitating both parties’ involvement and consultation in the processes of creating new common opportunities for the benefit of police sports and the IJF, in order to activate, within the police, the highest possible number of elite athletes, who could contribute to the development of the technical, tactical and applicable level of judo in the police of the nations who shall take part in this program. It would be a precious benefit for all judokas to get new professional perspective. Given that the Judo is an Olympic Sport and the IJF’s strategy is to promote judo as much as possible in the educational system, the values and principles of judo will contribute and will be beneficial in the process of professional preparation of the police personnel of all ages and ranks.

The Memorandum of Understanding and Partnership Protocol is signed in Paris on the 5th of February and for a period of 2 years, with an option of extension to 4 years and after 4 years, with automatic renewal evert 4 years, upon mutual agreement.