The International Police Sports Union will hold its first World Police Sport and Security conference “Sport to Serve and Protect” on March 23 and 24 in Kuwait under the patronage of HH the Amir Sheikh Sabah Al-Ahmad Al-Jaber Al-Sabah.

The conference is attracting a wide range of participation both regionally and internationally in the history of the union which is now presided by Lt. General Sheik Ahmad Al-Nawaf. The union was established in Paris in 1990 by an initiative from the active Spanish and French police sports with approval of 43 countries.

The USIP aims at encouraging sports with the police force around the world and coordinate the preparations, organizations and supervision of international events. It also aims at establishing social, cooperative and professional relations between police forces. USIP strictly bans any discussion or activity of political, commercial or religious nature. 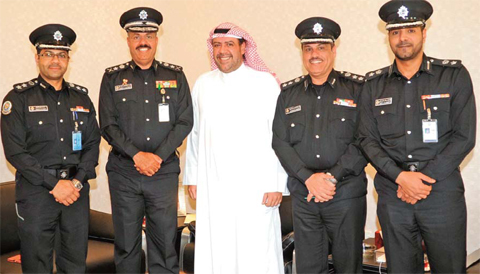 The Union has 54 members with Lt. General Sheikh Ahmad Nawaf Al-Ahmad Al-Jaber Al-Sabah as president from 2010 until now. Meanwhile President of Kuwait and International Police Unions Lt. General Sheikh Ahmad Al-Nawaf invited the President of Association of National Olympic Committees (ANOC), President of the Olympic Council of Asia Sheik Ahmad Al-Fahad said the conference which is being held for the first time confirms the competence of security and sports leaderships to organize such events, and that it is an important step for the protection of fans, secure sports competitions and confront the violence phenomena. Chairman of Kuwait Sports Club Abdelaziz Al-Marzouq lauded the idea of holding the conference in Kuwait under the patronage of HH the Amir. He said hosting of such international conferences is familiar to Kuwait, which is always a pioneer in hosting sports events.

He said the violence phenomena in Arab stadiums in general and Kuwait in particular are less violent as in the case in the Western countries, yet “we notice that it is on the increase lately”. On this part Chairman of Salmiya Sports Club Sheikh Turky Al- Yousuf said it is important to find deep-rooted solutions for the violence in sports arenas. He said there is no doubt that officials around the world try to curb the fan violence.