Tough fights at the Martial disciplines in Sao Paulo

Home/News/Tough fights at the Martial disciplines in Sao Paulo

Tough fights at the Martial disciplines in Sao Paulo

Sao Paulo 8th -9th of November 2013.
During the second and third day of the Pan-American Martial Games of the UDEPP the athletes of the championship try to fight their way up to the end ranking. Also on the second day the Brazilian delegation was too strong for the other delegations at the Jujitsu disciplines but the delegation of Ecuador still managed to take some medals .

Opening ceremony
Just before the finals the UDEPP held their first official opening ceremony for this Pan-American championship. Host and head of the Baro Branco police academy of Sao Paulo Colonel Maurizio Weisshaupt said that sport is a very important part in the program for the police cadets during their 3 year of education on the police academy. Colonel Maurizio said he was happy and honoured that he could host this first UDEPP event on the police academy and hoped to welcome the athletes once more in the future.

The President of the UDEPP General Hugo Marcelo Rocha said during his opening speech that he was proud that just after a half year of founding of the UDEPP they could organize the first Pan-American Championship in Sao Paulo. To held the championship at the police academy is o good example to connect police education with sport. USIP secretary General Sandro Dirckx said that sport is an important tool to connect the police with the community and build bridges between police forces Worldwide.

Finals Jujitsu, Karate and Taekwondo
The finalist gave their very best for the medals on Thursday the 8th and Friday the 9th of November. There were some tough fights and their fans encouraged their efforts. The medical staff had to treat some injured athletes but nobody was hurt seriously. The athletes showed their comradeship and friendship even after a tough fight. It was real matter of “let the best man win”. 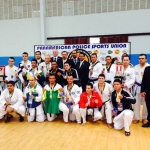 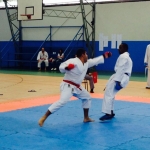 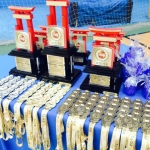 The atmosphere was great and athletes and audience could look back on a successful last two days of the championship. After the championships the medal awards took place. The organizers, staff and all of the volunteers which assist during this first UDEPP Martial Championship where thanked for their enormous work and participation. Specially main organizer Captain Marcello Rezende, President of the Brazilian Police Sport Federation and Secretary General of the UDEPP. He encouraged and inspired to participate all volunteers and colleagues to assist in this Championship. There was a great feeling of friendship and passion among the athletes and organizers. Most of them said that they are looking forward to the first World Championship of Martial arts in the future!