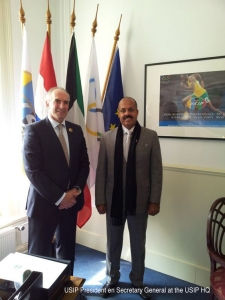 The new USIP headquarters is situated in a historic building, Castle Staverden. Staverden is located in the centre of the Netherlands and has an old history. During this visit the USIP delegation got a good impression of the new USIP office. The owner of the building Mr Koen Haklander showed the delegation some of the details of the property where the castle is situated. The property of 900 hectares is a protected landscape by the Dutch authorities. On the property are many excellent facilities to held future USIP conferences and meetings.