In an exclusive and a special interview, the editor of the USIP Sports Magazine talked with the new President of the International Military Sport council (CISM- Conseil International du Sport Militaire), Colonel Abdulhakeem ALSHINO ( from Bahrain) The CISM President confirmed that the police and military sport plays an important part in the world of sport . 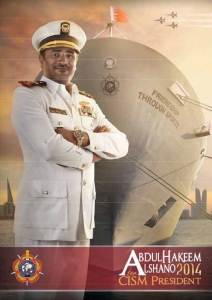 President Alshino: ” The CISM signed several MOU’s with these international sports organizations in different games such as the international football union FIFA and the European football union UEFA. We have also a MOU with the World Karate Federation ( WKF) like the USIP did last year. In fact we have agreements with most international organizations. It is difficult to specify but however the CISM is keen to activate these agreements. Concerning the CISM sport program of holding championships the CISM organizes 20 championships annually in all games what brings experiencing and exciting match up among the teams”.

The CISM President ends: ” The USIP and CISM has a lot of similarities on the terrain of sport. We looking forward to sign a MOU with the USIP. On different fields we can learn from each other. Everything in the belonging of sport! “

Note: The Headquarters of the CISM is located in Bruxelles- Belgium.
See: www.cismmilsport.org