The American Police Community AMERIPOL held its Seventh Summit in Quito- Ecuador from 4 to 6 August 2014, which presented issues of interest for strategic decision making in the promotion of police cooperation in the North and South American continent. During this AMERIPOL Summit, Colonel Gonzalo Ricardo Londoño Portela, Director of the Police Academy of Colombia and USIP EC Board Member held a presentation about the mission of the USIP and the upcoming First USIP World Police Games in 2015. These First World Police Games will be held in Bogota- Colombia on location of the Colombian National Police Academy. 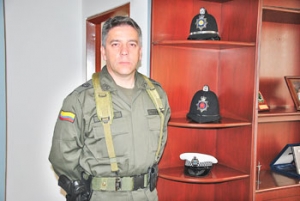 Colonel Londoño held his promotion presentation about the USIP and the First World Police Games also last July in Bogota-Colombia during the XIII Regional Conference of IACP (International Association of Chiefs of Police).
The National Police of Ecuador hosted the Seventh Summit which was attended by 30 Directors, Commanders and Chiefs of Police of the Americas, 21 representatives of Observer Organizations as well as special guests including international speakers. During the AMERIPOL Summit further strengthen fraternal relations where build that have to strengthen the “integration police by a citizen security in the Hemisphere,” through the agency of international cooperation as is AMERIPOL.
In the framework of the VII Summit, Board of Directors, Commanders and Chiefs of Police CYBER SECURITY discuss issues like: the phenomenon of cybercrime: a criminological gaze; TRAFFICKING: protocol regional action on the crime of trafficking in persons; CORRUPTION: promoting regional good practices in the fight against corruption and contraband smuggling problem and its impact on public safety, which are major threats to security in the region where recommendations and conclusions will be formulated in police policy outreach hemisphere on each of these issues.

Note:The Police Community of the Americas or Ameripol (Spanish: Comunidad de Policías de América) is a hemispheric mechanism of cooperation police organization created in 2007. Mission: The Police Community of the Americas – AMERIPOL is a hemispheric mechanism of cooperation, which purpose is to promote and enhance the police cooperation in terms of technical-scientific facts, training, exchange of information and progress in terms of legal assistance to allow guide a strategic and operational work against threats to public and citizen safety.