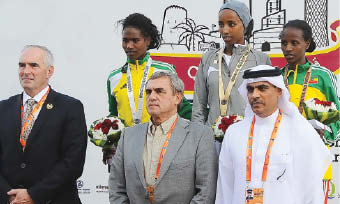 Bahrain clinched the top honours in the team event and Tunisia had to settle for the third position.

Yesterday at the Qatar Racing and Equestrian Club (QREC), Wordoza, competing for the first time in an international event, made a memorable debut by winning the race in 27minutes and 29 seconds.

The Qatari girl maintained a consistent pace throughout the 8km race course to emerge on top.

Ethiopian teenagers Askale Alemayeha Adula and Konjit Tilahun Biruk kept on accelerating but the local girl was equal to the challenge and won with ease in the end.

Wordoza, who was in fourth position in the early stages of the race pushed ahead at the last lap and held on to the lead till the finish line.

The Ethiopians, Adula and Biruk had to settle for the second and third place.   Adula registered a time of 27 minutes and 37 seconds, while Biruk competed the race in 27minutes and 54 seconds  .

“It was very nice to win the race. It is the first time I am competing in an international competition,” said Wordoza, who trained in Ethiopia for three months in altitude training ahead of the championship.

Competing on the horseracing track had its share of challenges for the cross country runners and Wordoza said she was delighted to overcome them.

“Racing on this track (QREC) is completely different to competing in any other cross country event. So it was a challenge and I am happy I rose to the occasion and delivered,”

In the men’s section, Bahrain made it a one-two with Isaac Korir and Zelalem Bacha Rrgasa capturing the first two places.

Korir clocked 35 minutes and 29 seconds to complete the 12km distance and was closely followed by compatriot Rrgasa, who took six seconds less the top place winner.